How to take TV down from wall mount? [guide for tilting, swivel & full motion] 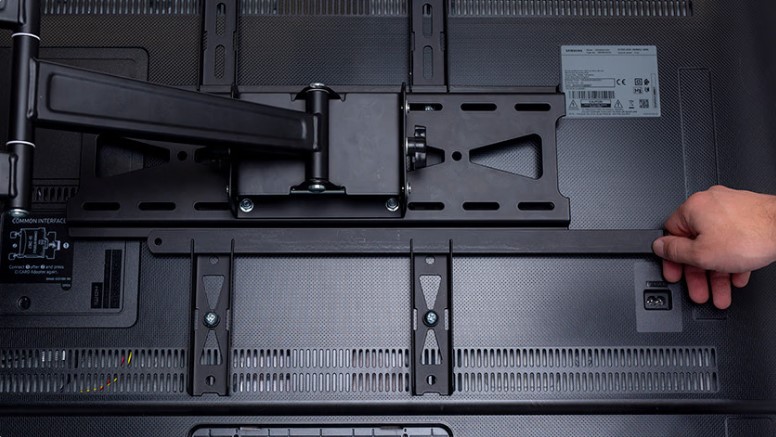 It’s likely that you’ll need to remove your TV from its wall mount for a variety of reasons. If you’re remodeling your home theater, you may want to remove your flatscreen TV from the wall while the work is being done. You may have just purchased a larger tv, or you may have decided to relocate your television to a new location. No matter what your reason is, here’s how to take the TV down from a wall mount, whether it’s tiled, swivel, or full motion.

So, how to take the TV down from the wall mount?

Step 1: Remove all the wiring and cords:

It’s important that you disconnect everything before attempting to remove your television from its wall mount. Do not leave any video games or other

devices connected to your television when you unhook it from the wall. If you have any power cords, you’ll need to disconnect those as well.

Step 2: Lift the TV off the mount:

The top of the mount serves as the last constraint. Get your help to lift the TV. Give one of the ends to each individual to pick up. Lift the TV over the mount after the count of three. You may put it on the ground once it comes off easily.

Ensure you are in a spot to support your television set securely after it has been removed from the mount if you are doing this step alone. To prevent the screen from being scratched, gently place the television on the prepared cloth once you have it in your own hands.

Typically, a protective component holds the TV to the mount. A pin or long plate that fits into a slot or aperture in the bracket is what this is. Pull it out of the bracket slowly.

You can see that the bracket is linked to the back of the television with four screws by placing the television face down on the soft fabric. Pretty much every single wall mount utilizes this four-screw setup. Now, dismounting is as simple as lefty-loosey. Remove the TV mount bracket off the back of your TV by unscrewing it with a screwdriver. Be careful not to scratch your TV’s back.

Step 5: Unscrew the TV mount off the wall

The second mount component is an empty frame on your wall without the TV. If you decide to take it down, just undo it the same way you did the mount’s other components. Remove the screws, and the mounting piece should easily slide off the wall without any effort.

Make use of a screwdriver and other suitable equipment to remove your wall mount if you wish to. If you want to take it a step further, paint and spackle the wall after that.

Step 6: Fix the holes in the wall

Put some putty on a putty knife and use the knife to push the putty into the holes. With a separate, wet putty knife, remove the extra material. Sand this area with sandpaper when it has dried.

How to remove the TV from the wall mount with a bar lock?

If the wall mount you purchased comes with a bar lock, the bar will be able to move horizontally along the back of your television set. On the other hand, a safety lock of the pull-string kind often contains strings that are installed on each side of the tv. To detach the television from its wall mount, you will need to pull these cords in the appropriate directions.

If you have decided that it is time to take your TV down from the wall mount, we hope you found our easy DIY guide helpful. Remember, if at any point you feel uncomfortable or uncertain about the process; please call a professional TV dismount service for assistance. Taking down a TV can be dangerous if not done properly so it is always best to err on the side of caution. Thanks for reading and happy dismantling!

How To Remove Tv From Wall Mount Without Strings?

How to access back of wall mounted TV and slide it?