What is the best place to put your TV in bedroom? 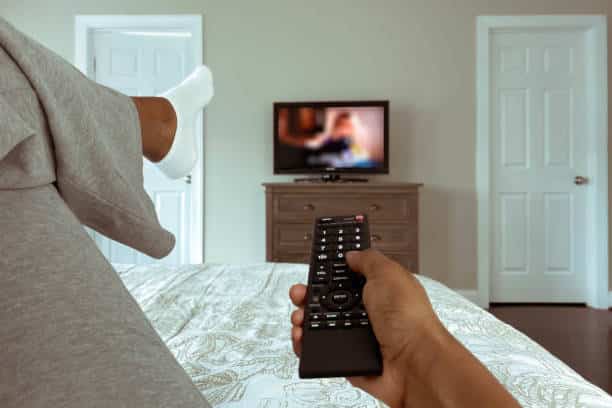 What is it about watching TV in bed that feels so much more relaxing than watching it from a sofa in the living room? But designing a bedroom with a TV in it can be tricky. There’s so much to consider! You don’t want the TV to be the focal point of your bedroom or become an eyesore. And then there are the limitations of where to put a TV, how to make it work with the layout and architecture of your space, and finally how to make it actually look nice. In the following post, we will find out the best place to put the TV in the bedroom, ideas to place your television when you have a small bedroom, and as well as what is the proper height to have your TV mounted.

CALL US NOW FOR PROFESSIONAL SERVICE

So, what is the best place to put the TV in the bedroom?

To be brief, the best place to put the TV in your bedroom is to place your television directly across from your bed. This allows for an easy television viewing experience as well as clear sightlines. You may also put it above or on top of your dresser or another piece of low-profile furniture.

Since you don’t want your TV to be too far from your bed, this is an excellent alternative for small bedrooms. It’s also ideal for people who prefer a clear and uninterrupted view of the television.

Keep in mind that the placement of the television in your bedroom should be depending on your personal preferences. Nevertheless, there are still some wonderful options, such as putting it on top of a dresser, hanging it on the wall, putting it on a post at the foot of the bed, or hiding it within a cabinet. Make the screen simple to see by placing it at eye level or tilting it downward, just as you would in any other room.

So, what is the best location for a TV in the bedroom?

As previously stated, placing your TV Straight across from your bed would be the optimal position. When watching television, this allows for a relaxing visual experience as well as excellent clear visibility. It can also go on top of or over a dresser or other small piece of furniture.

Where to put the TV in a small bedroom?

In general, the simplest solution is to position your television on top of a piece of furniture. This might be a tall dresser or a cherished piece of furniture, and it should be placed directly across from the bed’s foot.

You may place the television on the wall in the same way you would in your living room, as long as the location you pick does not interfere with your artwork or another décor. You might also use mounting brackets to suspend it from the ceiling. You might choose a smaller TV model and mount it on top of a flexible pole at the end of the bed if you’re feeling artistic. When the screen is not in use, you may rotate it or lower it. The TV might be mounted on the wall with an adjustable arm adjacent to the bed, or imaginative people may turn it into a room divider.

Where to put a TV in the bedroom with lots of windows?

Installing window coverings is the simplest solution if you’re having trouble deciding where to place the TV in a living room with plenty of windows. Opaque drapes may be quite useful, and draperies with liners can undoubtedly reduce glare on a TV in a bright environment. Shades made of braided wood or Roman shades will also work.

The window coverings you choose will be determined by the room’s design concept. Whether you’re wondering if you can set a TV in front of a window, you should probably avoid it. Avoid placing your television in front of or across from a window, particularly one that faces west. You’ll want to reduce the amount of glare and light beaming on the screen as much as possible. When determining where to place the TV in whichever room you’re constructing, keep in mind the direction natural light will be coming in from.

What is the proper height for wall-mounted TV in the bedroom?

The majority of interior designers and architects believe that the optimal height for a mounted television in a bedroom is around 43 inches above the floor.

To decide the right height for a wall-mounted TV in the bedroom, you must first consider the screen size, the room’s size, and form, as well as the angle from which the television will be watched. Will the wall-mounted TV in the bedroom be watched from a single point of view or all possible angles? In any case, the optimal height should be at or above your level of vision.

For some people, the downside of having a television in your bedroom is that it not only keeps us up later at night but it has also been shown in research that viewing television before bed disturbs sleeping habits. Eliminating the television from your bedroom allows you to get more and better sleep, resulting in a more relaxed and productive day.

Data shows that Americans watch more than 35 hours of television every week, indicating that the allure of the screen is just too great to resist. No one intends to watch television for five hours a day. The temptation is too strong… particularly when we are exhausted.

So, is a TV in the bedroom bad for your health?

Children who use TVs in their rooms do much worse on school assessments and are more likely to have sleep issues. Furthermore, having a television in the bedroom is highly linked to obesity and an increased risk of smoking.

The evening, on the other hand, gives a crucial chance to reflect, review, and evaluate your day. As a result of this evaluation, we can learn from our errors and progress as people. Unfortunately, for the sake of entertainment, many individuals will forego this chance.

But, are there any pros or cons of TV in kids’ bedrooms?

Researchers think that having a tv in the bedroom might lead to isolation, less physical activity, and bad sleeping patterns. Limit your screen usage to no more than two hours every day. Most children should obtain at least an hour of light exercise every day, as well as nine to eleven hours of sleep per night. Remember that it’s not only how much TV your youngster watches; it’s also where he or she watches it.